The Nina, The Pinta and the Vanishing Treasure Now in Bookstores!

The Nina, The Pinta and the Vanishing Treasure is now in bookstores!

It was also reviewed by Kirkus this month. Check out the review:

A mystery at the museum is the perfect case for an aspiring fourth-grade detective. Early one morning before school, Alec gets to go with his father, Officer Flint, to the American History Museum, where somebody has made off with the entire cache of gold coins in the Christopher Columbus exhibit. Curator Dr. Glumsfeld gives Alec an uneasy feeling, but this doesnÕt prevent him from trying to crack the case. His neighbor, Emily Berg, has no interest in detection, but the new girl at school, Gina Rossi, shares Alec’s passion for puzzles, and becomes his sidekick. The pair even begins passing coded messages, a puzzle-solving bonus for the reader (with solutions at the back of the book). Santopolo’s prose crackles, and she manages to weave in a fair degree of historical information on Columbus as she spins her yarn (and supplements it with a lengthy Author’s Note). The first in what promises to be a solid middle-grade series in the tradition of Encyclopedia Brown. (Fiction. 9-12)

I love that bit at the end about Encyclopedia Brown!

Also, if you’re going to be in the New York area on June 24th and would like to celebrate the publication of The Nina, The Pinta and the Vanishing Treasure, there’s going to be a launch party at Books of Wonder, complete with cupcakes and sparkling apple cider. 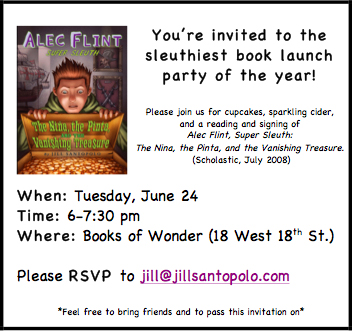 And one last thing: The second book, which I said officially had a title last month, now has a new title. It’s going to be called The Ransom Note Blues: An Alec Flint Mystery and will be coming out in approximately a year from now. I can’t wait!