I celebrated the holiday season with The Light We Lost.

Here is a little celebratory excerpt from The Light We Lost, in which Lucy and Darren spend their first Christmas together:

Darren was so excited about this holiday trip. He made list upon list to be sure we wouldn’t forget anything, and after he checked and double-checked our suitcases, he declared us all set to leave the day before Christmas. Then he got the flu.
“I’m sorry for ruining your Christmas,” he said.
I kissed his feverish forehead and said, “As long as I get to spend it with you, it’s not ruined.”
He took some medication and went back to sleep, and I snuck out of the apartment again. I bought a three-foot-tall tree—the biggest I could carry on my own—and lights and tinsel and glitter snowflakes that had already been marked twenty percent off at Duane Reade. I got a box of red and gold ornaments, too, and a ballerina for the top of the tree, because everything else had been sold out. Then, while Darren slept, I turned his living room into Christmas. I even unpacked our gifts for his whole family and put them under the tree, which I’d balanced on the coffee table, to make it look taller. It felt like I was giving him back some of the happiness that he’d given to me over the past year.
“Lucy?” Darren called from the bedroom, just as I was sticking the last sparkly snowflake to the wall behind the couch.
“Are you moving furniture?”
I heard him padding slowly to the door, coughing as he walked, and then the bedroom door opened, and he was there, leaning against the doorframe, pale and rumpled, with dark circles under his eyes. He looked at the living room and didn’t say a word.
“Darren? Is this okay? I wanted to make sure that being sick didn’t mean you missed Christmas.”
I took a step closer to him and saw tears in his eyes. “Lucy,” he said, and started to cough. “Sometimes I love you so much that I don’t even know how my heart can stand it.”
I walked over to him and hugged him, harder than I ever had, as if I somehow needed to show him how much I loved him with the strength of that hug. Darren was my Old Nassau experiment. The longer we were together, the more I loved him, and the better it got. 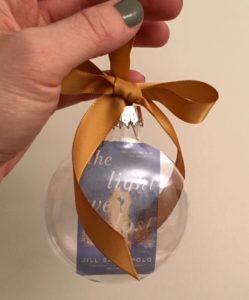